Even though I’m not grinning in the photo, this is fun. 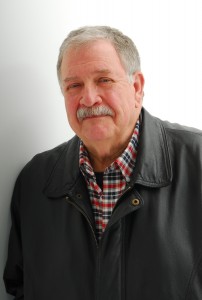 See, I love words. It started in church when I was three or four. Every Sunday I fidgeted – but had no choice about listening quietly – as the priest intoned the stately cadences of the old Book of Common Prayer and as my parents and the other adults in the pews recited sonorous responses.

I wasn’t aware of what was happening any more than a fish is conscious of the water in which it swims. But slowly the beauty of English, indeed the most beautiful of all English prose, began collecting in my little brain like so much treasure.

Sometime during kindergarten, mom read Treasure Island to me – two chapters a night. At Christmas, Dad read A Christmas Carol with his attempts to render British accents. This was the 40s, long before TV or video games could block the flow of  lovely language. After that I began tackling Dan’l Boone and Johnny Tremain and then Captain Horatio Hornblower.

But early on, somewhere between Long John Silver and the Ghost of Christmas Past, my pure enjoyment of stories became a love of story-telling and, later, to the painstaking assembling of words, just so, to create pictures in the mind. 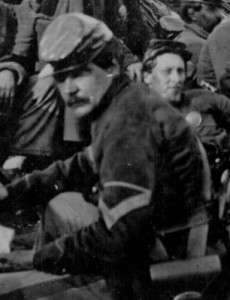 So . . . I’ve written most of my life, mainly as a newspaperman, only seriously trying to undertake fiction a decade ago. A Corporal No More is Book One, a novel of the Civil War loosely based on my great-grandfather’s experiences in the Army of the Potomac. The corporal at right isn’t Joe, but looks very much like him

Great-grandpa apparently was quite a guy, a lumberjack and hard-shell teetotalling Baptist. He was wounded, spent time as a POW, migrated with his brothers after the war to the empty Kansas frontier, learned to farm and ultimately wound up a probate judge. His personal motto that he drilled into his two boys was: “You’ll rust out  before you’ll wear out, so get busy.”

Now forgive my grumpy look. It’s the natural result of eye strain and the frustrations of a 20th century man trying to use 21st century technology. I mean, I’m not quite clear on the difference between an iPad, an iGezonerator and an iPhone, or even if such things exist. Anyhow, I’m a fairly convivial sort, not exactly a party animal but not a teetotaller either. Basically, I love meeting people and, like all old guys, griping about how the country is going to hell.

My career started at the Kansas City Star. From there I did a hitch in the Army as a  in Korea, Washington, D.C., and Vietnam. (Washington was the worst.) After the Army I worked for newspapers with one brief foray into marketing. Somewhere in there I read a fine Civil War novel, The Killer Angels. It related how the 20thMaine, commanded by a renaissance man named Lawrence Chamberlain, stopped the Rebs at Little Round Top.

Then, quite by accident, I discovered that Great-Grandpa’s regiment, the 83rd Pennsylvania, fought shoulder to shoulder with the 20th in that same battle. So why not tell the story, I thought, from the standpoint of a common soldier? That’s the genesis of Corporal No More. More inside. Come take a look. Check the sample chapter.